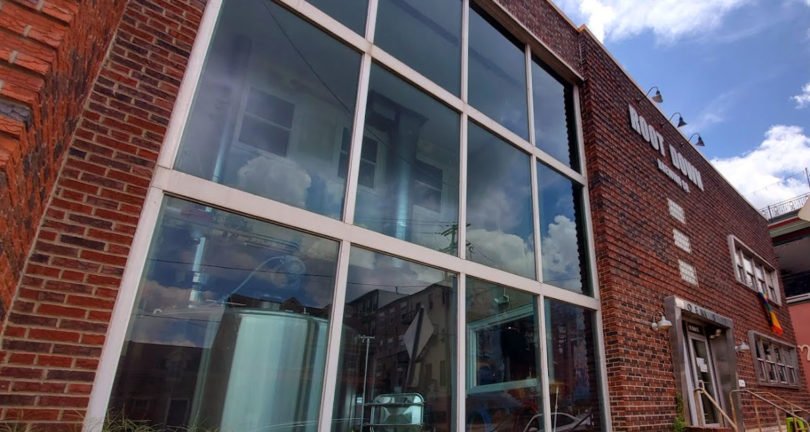 On a whim I decided to take my son down to Root Down Brewing Company for lunch.

On a whim (and because I hadn’t really had the chance to try too much there yet), I decided to take my son down to Root Down Brewing Company for lunch.

For a 4-year-old, even the adventure to get to the brewery was a chance to have some fun, as we played little word and sight games in the car on the way, and as we walked from our parking spot.

It was when we got the back seating area when his excitement went into overdrive, upon seeing a line of arcade cabinets and cornhole set up on the end. We had a blast playing classic Simpsons, Pac-Man, and Xenophobe, among others, and he made sure to get in a few shots with the bean bags.

My son was in charge of ordering the food, finally deciding on pizza and nachos. No complaints from me on this request, so we ordered the Loaded Nachos ($11) and two pizzas off their limited-time artisan pizza menu, a Shrimpy Pesto ($13) and a Margherita ($10).

Everything was delicious, I especially enjoyed the pico de gallo on the nachos. Personally I do feel everything was a bit extra crispy, but this was more of a personal preference, and one benefit of an extra crunch is it takes longer for the chips in the center to soak through, so… bonus, but we did leave the pizza crusts somewhat untouched.

The Shrimpy Pesto pizza was a definite hit with my son, whose only preferred sauce at home is Basil Pesto anyway, and loves shrimp too. I wouldn’t have thought of that combination for a pizza, but it’s definitely something I would do again.

Margherita was exactly as expected. Classic pizza style. We ended up eating it that evening, there was no way me and my son were getting through all that food for lunch. The portion sizes here are just right, I didn’t have to over-order.

This one was all me, obviously. The beers were both absolutely delicious, perfect pairings for the nachos, if I might add. If you know me, you know I love a good hazy IPA, so it’s no surprise I went right for these two.

Brewed for our 4th Anniversary! This hazy IPA gives off a sweet profile of passionfruit, bright naval orange and Juicy Fruit (R). With hints of vanilla and lemongrass, finishing with a slight earthy spice.