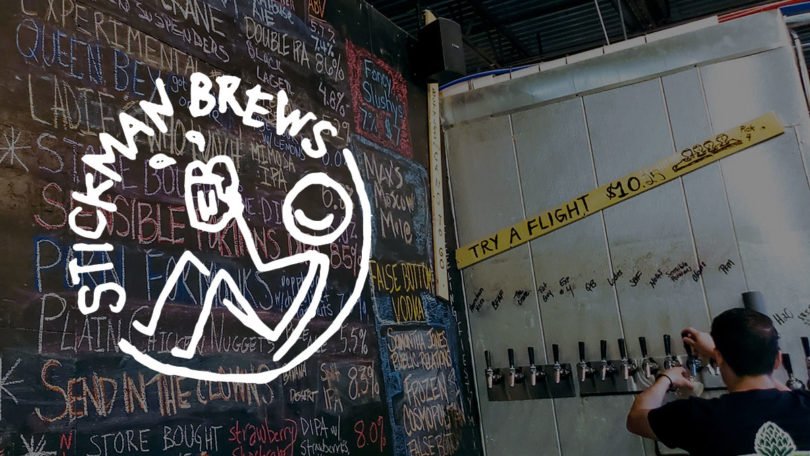 Stickman Brews is an absolute powerhouse of a brewery, deserving of all the accolades they have gotten so far. Join us as we review a flight of beer in their Royersford location.

I am so utterly disappointed in myself that this brewery has remained under my radar for this long. I’ve passed by the Chester Springs location dozens of times (I thought it was a coffee shop!), and I live just a stone’s throw from their Royersford location.

It wasn’t until I saw their beer in my local supermarket that I realized my mistake. This is an absolute powerhouse of a brewery, deserving of all the accolades they have gotten so far.

I went to the Royersford location with a friend to grab some flights and quick food, and though I was a little disappointed with my Chicken Parm Sandwich, I really didn’t care because the beer absolutely blew me away. Apparently the BBQ at Chester Springs is to die for too, I will have to try that out.

I know, I know. I have a type. I’m the guy that Stickman Brews was NOT brewing for in their early days, with a major focus on American Farmhouse Ales, with 10 beers that would emulate popular styles with their own Farmhouse twist.

Fast forward a few years and the chalkboard is a bit more varied in style. Apparently people are stubborn and don’t want to learn. That tracks with what I know about humanity, but I have to say, I’m not totally disappointed in this development.

I promise to return to Stickman and try a more varied flight, but this was my first trip, and I want what I want!

According to Stickman Brews, this is their “Best DIPA ever” so I came in with high expectations, which were rapidly met and exceeded. It was my first sip of the night, and I can’t deny the attractiveness of this brew.

Incredibly juicy. Tropical fruits with pleasant peppery hop undertones. Undeniably good, and now I know I have to try the original this was built off of.

If you can’t brew a juicy DIPA at home, store bought is fine.

Store Bought Is Fine is more than fine as it is everything that a DIPA should be. Malt and hops at the forefront. Full-bodied, fuller than the rest tonight, at least. Wonderful!

A hazy, murky golden-amber, almost orange. Moderate head that very quickly dissipates leaving some sticky lacing down the glass. Tropical fruit and floral hop aromas when you get anywhere near the glass.

Taste just like the smell, with bitter hops perfectly balancing out the bready malt undertones. This is 8.5%? No way. I could drink more than a few of these. This is a definite crowd-pleaser.

Send in the Clowns

Send In The Clowns is a banana split themed double dessert IPA. It’s brewed with a whole bunch of bananas and actual ice cream cones in the mash and then we added a bit of chocolate and vanilla and just a lil cherry on top with the dry hops.

I have a confession to make. I’m pretty sure I was poured the wrong beer. I could not taste any bananas or ice cream cones, just seemed like another DDH The Crane.

I had left the dessert IPA for last (I mean, it’s dessert, right?) and by the time I got there, I didn’t really mind because it was SO GOOD and I just went with it, never saying anything to the bar. I guess now I have a very compelling reason to return… I need to try this beer again for the first time.