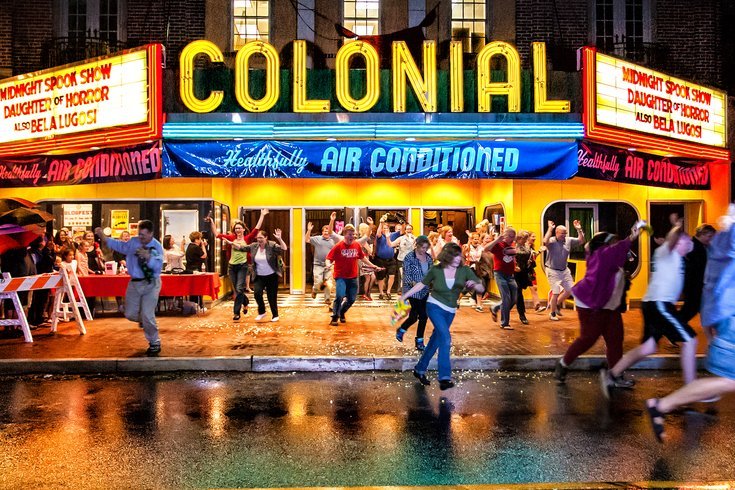 The Phoenixville Blobfest commemorates the classic 1958 movie ”The Blob” and the famous run-out scene filmed at the Colonial Theatre.

Phoenixville, PA — We will be honest, when we moved to Phoenixville in June 2017, we had ZERO clue what the Phoenixville Blobfest was; in fact, we had never even seen The Blob and didn’t know it was “a thing.” Boy, were we wrong!

The Annual Phoenixville Blobfest is a 3-day event that commemorates the classic 1958 movie The Blob that had a famous scene filmed at the Colonial Theatre in Phoenixville, Pennsylvania.

Editor’s Note: Our update with photos of a previous year’s event is below, but first … a little history lesson is needed!

Events for the Phoenixville Blobfest kick off on Friday night with the notorious “run-out” recreation at the Colonial Theatre, click here for details … Wait, you don’t remember the famous run-out scene? Here’s a refresher from The Blob (1958) trailer. (It’s less than 2 minutes… go ahead and push the play button…)

Side Note: The run-out scene also made a cameo appearance in the movie, Grease, when the trailer of The Blob was shown in the drive-in movie scene.

Anyway, it is the run-out scene that is re-enacted each year in Phoenixville… and hundreds (thousands?) of people and lots of news crews come out to cover it…

The Blob stars Steve McQueen (in his feature film debut) and Aneta Corsaut, as well as co-stars Earl Rowe and Olin Howland. The Blob was distributed by Paramount Pictures as a double feature with I Married a Monster from Outer Space.

Where was The Blob filmed?

Filmed in and around Valley Forge, PA, principal photography for The Blob took place at Valley Forge Studios while several of the most pivotal scenes were filmed in the towns of Chester Springs, Downingtown, Phoenixville, and Royersford, including the basement of a local restaurant which is today named Downingtown Diner.

What is The Blob about?

In the story, a fast-growing, corrosive, alien amoeboidal entity crashes to Earth from outer space inside a meteorite. It soon begins to devour and dissolve the citizens in the small communities of Phoenixville and Downingtown, PA. As it does, it grows larger, redder, and more aggressive. Over time, it becomes larger than a building.

The Blob first premiered as the “B film” of the double bill with I Married a Monster from Outer Space; however, it was quickly moved up to be the main feature. While audiences liked it, critics were not as kind; however, it has since become a cult classic. And, it is now the whole reason behind the annual Phoenixville Blobfest.

How can I participate in Phoenixville’s Blobfest?

While only 350 people are lucky enough to purchase tickets to participate IN the run-out (and those tickets sold out this year in just two minutes), thousands of people gather around to watch them run-out. We aren’t sure what exactly they all do afterward (it only lasts a minute … but it is cool) … we heard there is a dance … or maybe they all run out and over to Brown’s Cow for some udderly delicious ice cream (it is always packed … and it IS udderly delicious).

Oh, yes, people do dress up for Blobfest. Expect to see aliens, ghouls, monsters, creatures … and, of course, people dressed like they stepped right out of the 50s.

After Friday night’s run out, there is a dance, and then on Saturday, a festival.

And … lots of people.

We will be taking pictures this year and will update this post after the event … in fact, we aren’t even sure what is scheduled for Sunday, so we will have to wait and see!

What a great weekend! The Blobfest truly is a terrific and unique event here in Phoenixville and we thoroughly enjoyed it. Here are a few observations and photos from this weekend’s events:

Last year, we squeezed our way through the crowd so we could actually see the run-out… if you don’t … well, it is a little underwhelming …

Fortunately, there are some really terrific videos of the run out on Facebook. Plus, Richard Gump Devaney (who has been kind enough to let us use his photos) was upfront and got a great view! Just look at this crowd!

(Note, we were ALL THE WAY back by the crossing stop sign on the left!)

We also realized that there’s actually a whole lot “more to it” than just the run-out. This year marked the 19th annual Blobfest and the 60th birthday party for Phoenixville’s favorite movie monster. There was a Shorty-Award film screening inside the theater and there were a lot of special guests on hand including the original silicone prop itself. The Colonial Theatre offered lots of screening and meet and greets. There was live music from Dibbs and the Detonators, a fire extinguisher parade, a costume contest, and much more.

…to creepy baby dolls and other scary looking things…

Now, these will give you nightmares, scary sure has come a long way over the past 60 years! Speaking of scary, how about some man-eating plants?

On Sunday, The Blobfest wrapped up with a Double Feature inside The Colonial Theatre, a merchant facade content, and a 5k run.

Thanks for reading! We will add more photos and thoughts next year! If you enjoyed this write-up, please share it on social media and be sure to leave a 5-star review of The Blobfest below!

This is definitely something different and unique to Phoenixville. Come into town on Friday night for dinner, to listen to the music, and to watch the run out (be sure to squeeze in so you get a good view). Of course, you must go to Brown’s Cow afterward for some ice cream! On Saturday, plan to spend the day in town … first at the Farmer’s Market and then at the Blobfest Street Fair. You might even want to catch a screening of The Blob to get out of the sun for awhile (be sure to get tickets in advance) and then grab a few drinks and dinner here in town!